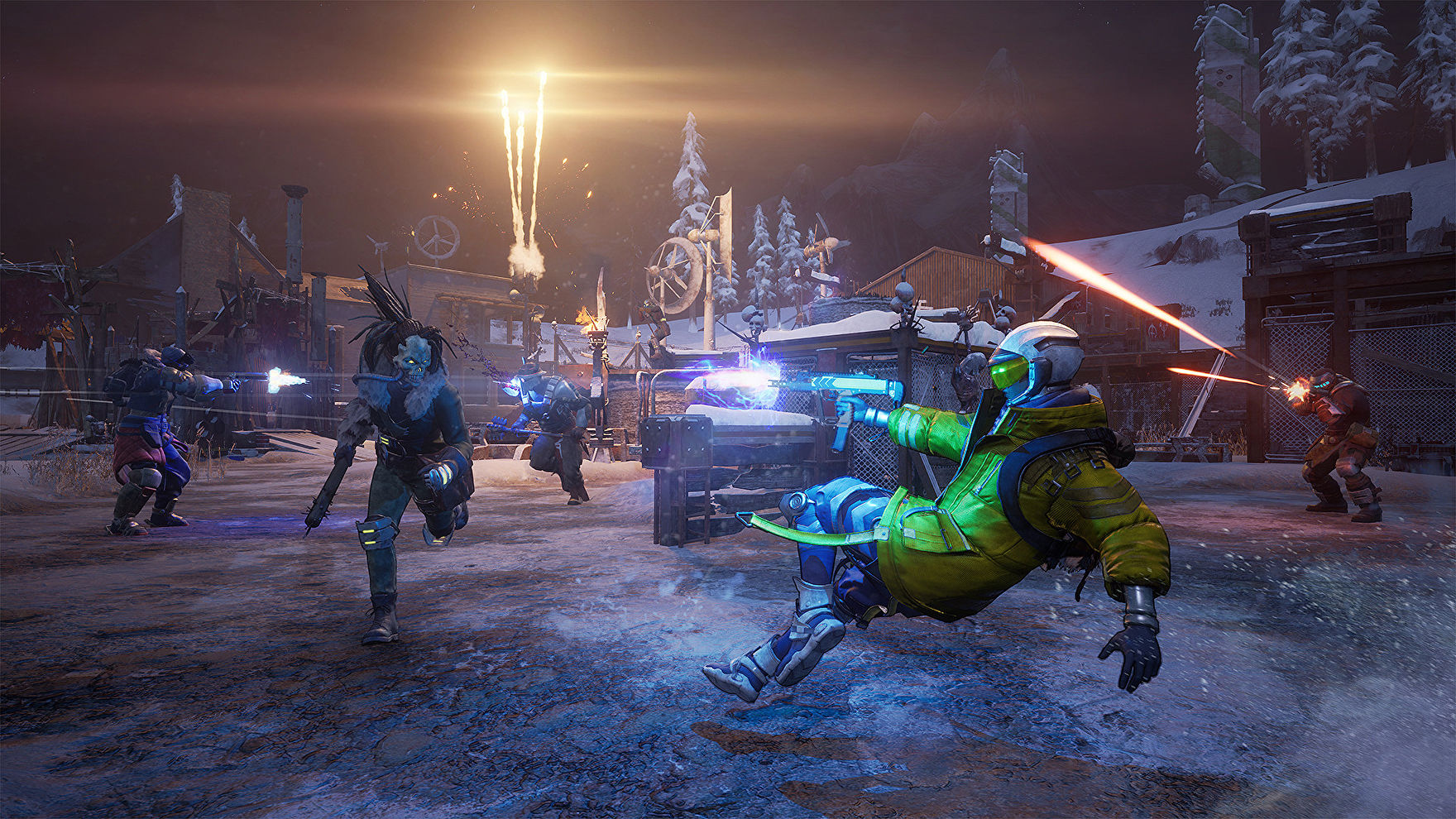 I have been playing Scavengers for more than a month. It is the first game ever that makes me feel like I am co-creating legendary stories to be remembered. In fact, I still recall the first solo extraction I pulled off on my first day playing the game - with the countdown music blasting in the background, my attention circulated between radar, map, the third-person camera view, and the hunger and cold status bars. I was literally panting for oxygen. I felt significance in that moment.

Analyzing that feeling afterwards, I figured the music is definitely one important component. The countdown music did a fantastic job building up tension in a rich and dynamic fashion. Loving the music so much and wanting to understand its power, I transcribed the key moments in this d-minor piece using flat.io. After the slow build-up of suspense in the beginning, the main theme began: 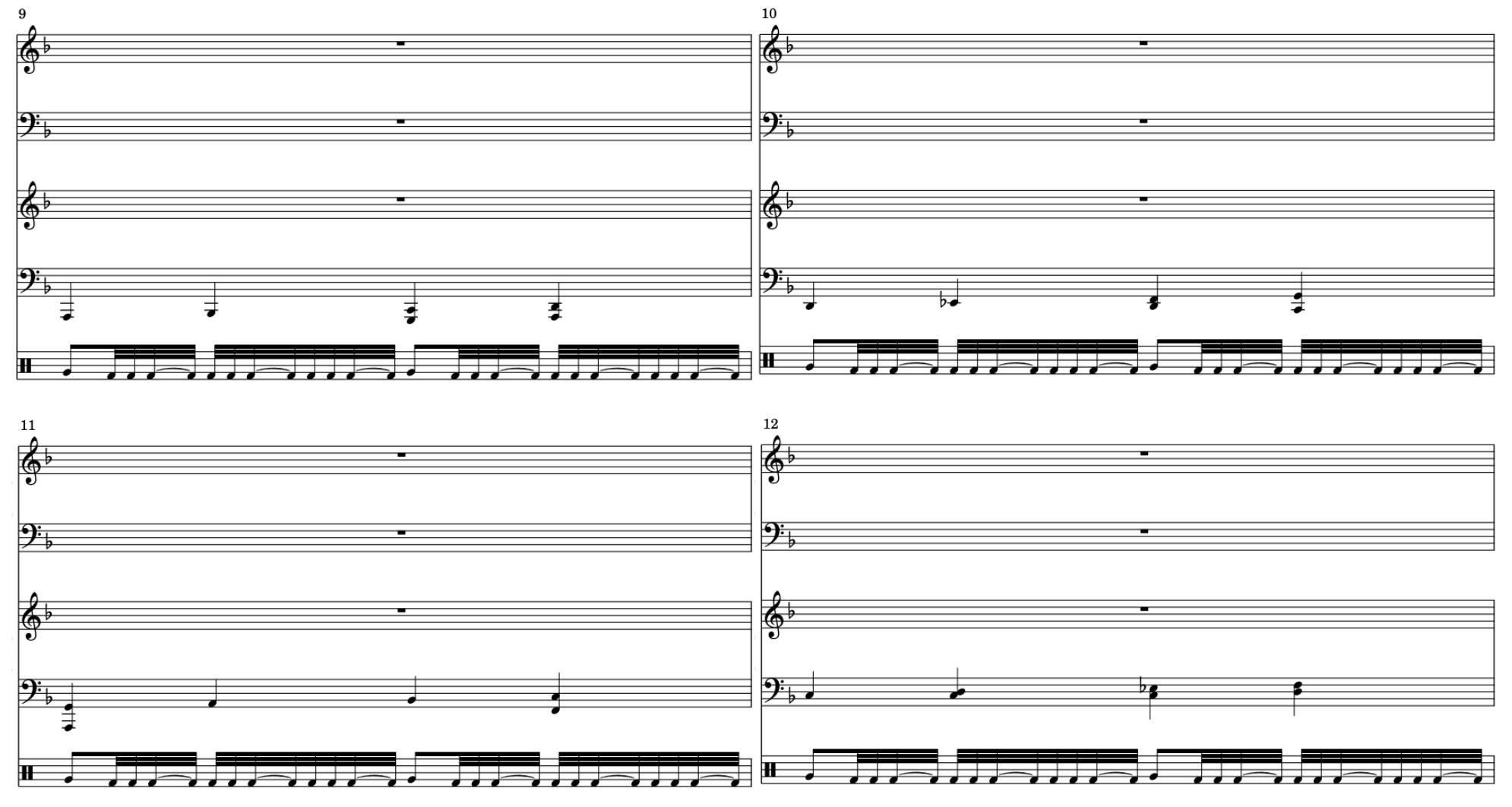 The slow climb features four measures of double quarter-notes, where the lower notes always stay constant until the last note of the measure, while the higher notes climb steadily. This produces the image where two teams are racing the score objectives with one of the team steadily leading while the other team always manages to catch up. The drum in 3-note beats (period = 1/4 = 0.25 measure) also adds a sense of pulsation and urgency. Then, the main theme repeats with the addition of the high-pitched notes in 6-note cycles which seem to be produced by metallophone: 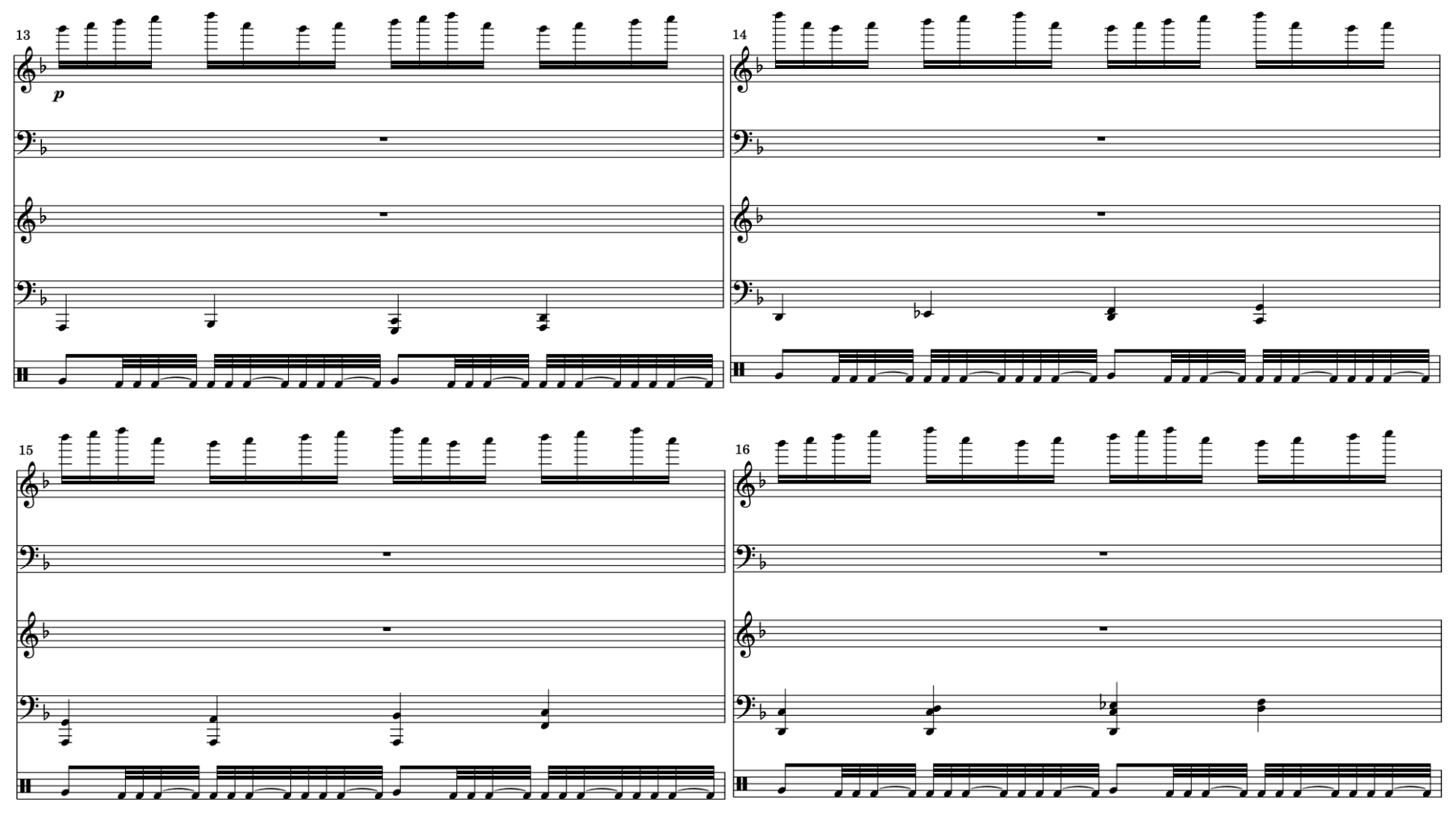 The high-pitched 6-note cycles (period = 6/16 = 0.375 measure) create wonders - the cycle arrives at different offsets at the beginning of different measures, creating a sense of unpredictability. Four measures later, a transition occurs, after which the high-pitched notes remain while the main theme evolves from slow-climbs (period = 4 measures) to diminishing-drops to the tonic (D; period = 2 measures) starting from an octave drop: 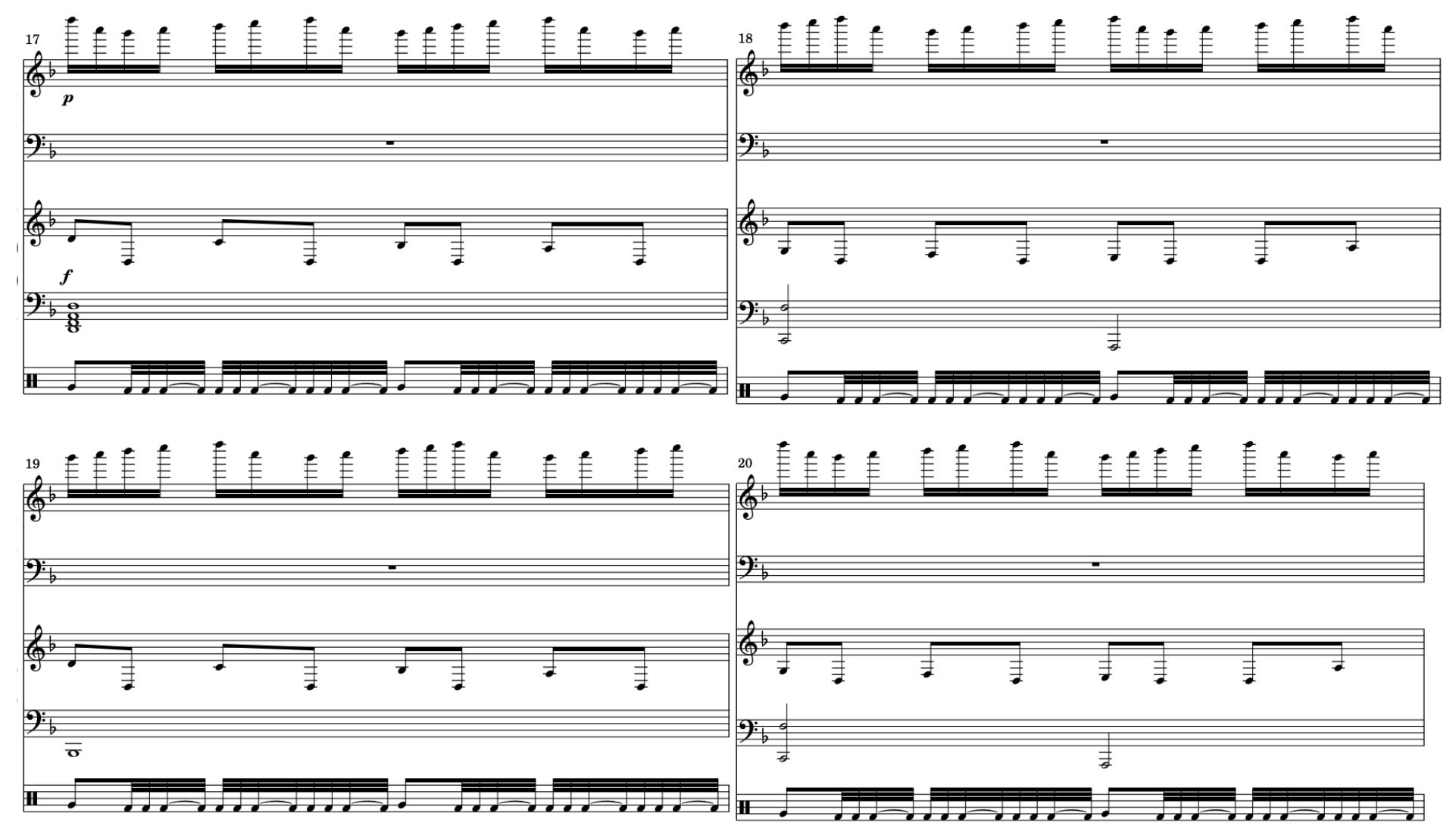 This change marks the return to the tonic, which at this point usually coincides with the beginning of the end-game climax, where the remaining teams encounter one another near the drop ship, all wielding their best weapons and using their special abilities. Also note that the drum beats, high-pitched cycles and main theme all have different periods, creating rich temporal dynamics. Four measures later, the diminishing drops get elevated by an octave and the entire pattern repeats: 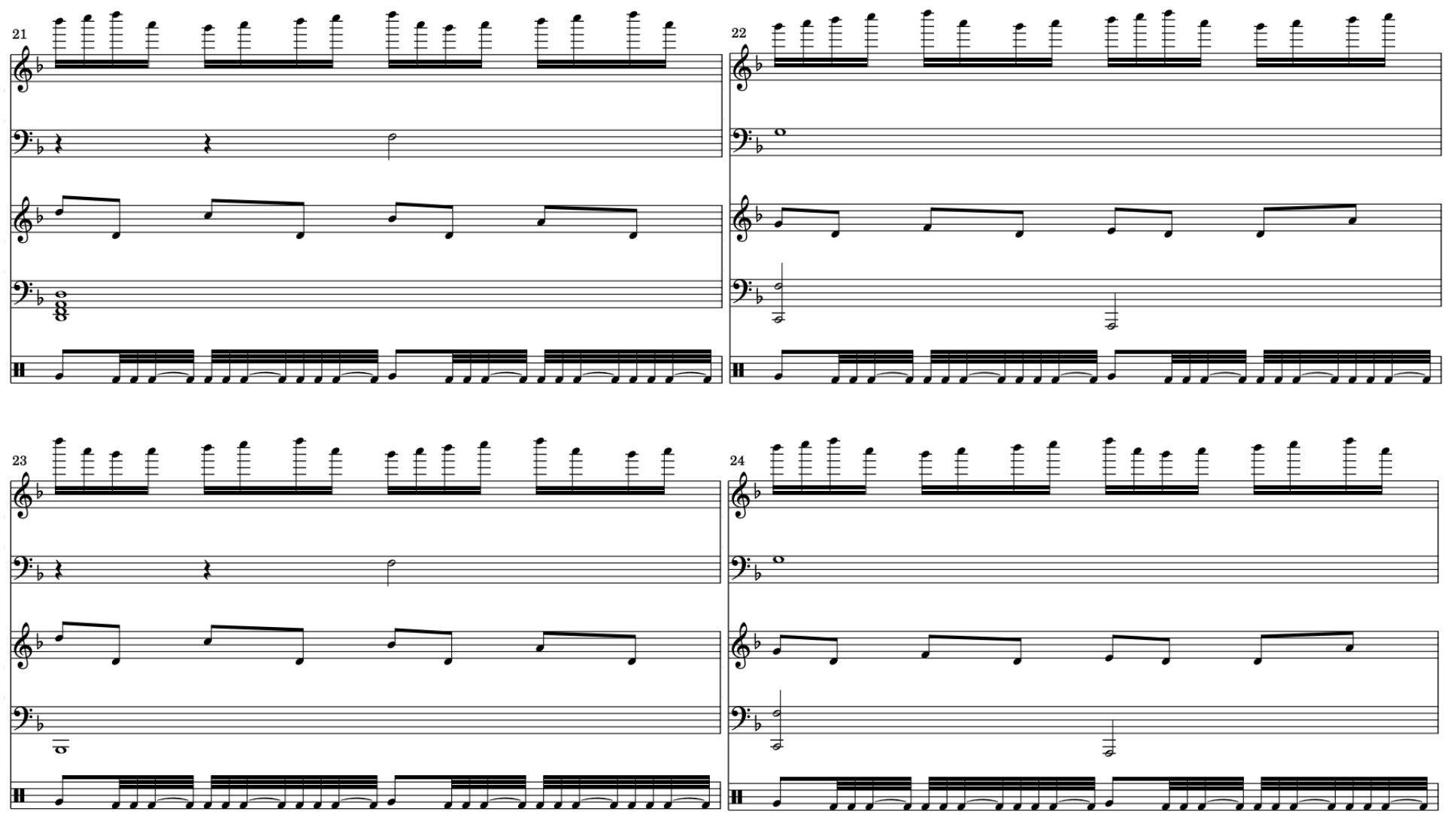 The elevation by an octave coincides with the pinnacle of the end-game climax, where teams get eliminated in chaotic fashions, data points get redistributed, the scoreboard updates hastily, and sneaky players try to sneak onto the drop ship. Finally, all sound disappear except for the high-pitched cycles and the drum beats: 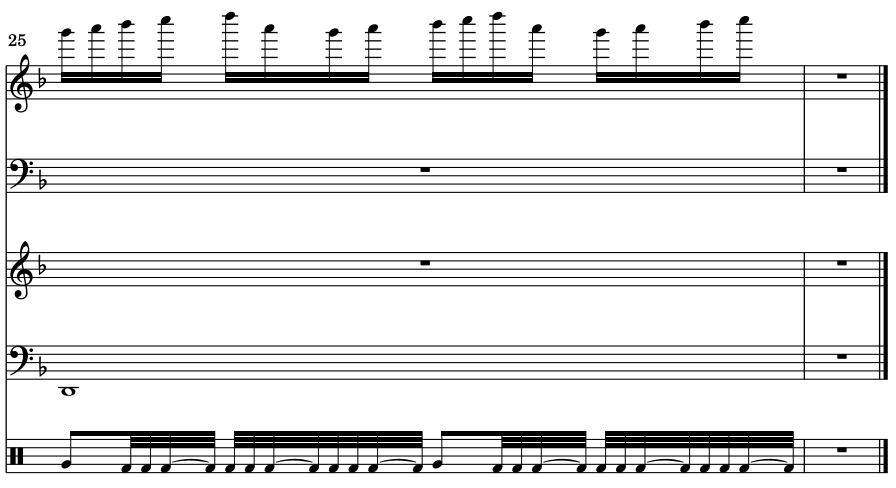 This lasts for a single measure and ends at the leading note (C) instead of the tonic, which creates the sense that the story hasn’t ended yet but time freezes suddenly, leaving everything in suspense again, mirroring the suspense in the beginning of the music.

Additional to its fantastic soundtrack, Scavengers manages to create story moments for me. Officially, the game is PvEvP sandbox, which means the player teams compete against one another (PvP) while dealing with the hostile environment and the hostile NPCs (PvE); the sandbox aspect of the game points to the fact that player teams are free to choose strategic goals to pursue - securing cars to increase mobility, engaging high-value targets (bosses) for data points and salvages, or leveraging storms to hide their tracks on enemy radars. Granted, I have heard countless players praise the combination of PvE and PvP, making the game more dynamic than Apex Legends (which I have not played; I generally dislike first-person games because I prefer seeing my characters through third-person cameras) for example. However, there are two brilliant elements in my opinion that elevated this game: the slide-jump mechanics and the pacing of the game through macro events.

The slide-jump mechanic of this game is, in one word, liberating. I have long been more or less constrained to the thinking that with PC games, player input is restricted to keyboard and mouse buttons, which together constitutes the ultimate bottleneck that constrains player expressivity. Yet, in order to trigger a slide-jump in Scavengers, the player character has to both reach an enough speed while sliding and press jump. In other words, a successful slide-jump depends on two successive player inputs (crouch key and jump key; pressing crouch key while running triggers the sliding) plus a player character state (speed). This mechanic, together with the complete absence of fall damage plus the undulating procedurally-generated terrain, increases player mobility dramatically. By leveraging the slope and topology of the terrain, players can pursue targets or break free from dangers from surprising angles at high speed. Players can also slide-jump from nearby ramps onto the top of building structures that are inaccessible otherwise.

2/ Pacing of the game through macro events

The underlying pace of the game is dictated by three components: (1) five categories of closing storm circles, (2) the spawning of high-value targets (2 to 3 bosses, 1 supply drop, and 1 orbital debris, all marked as unique purple symbols on the map), and (3) the arrival of the drop ship exactly 5 minutes before the game ends. The closing storm circles are common across most battle royale games. The spawning of high-value targets usually draw multiple teams to pursue, triggering team fights; player teams could also take advantage of the chaos of team fights and “third-party” other teams. The arrival of the drop ship is the genius invention of this game, making this game not about surviving as the last player/team standing (battle royale), but about surviving on the drop ship before the drop ship takes off at the end of the game. Combining this with the information warfare system, which is covered extensively by the game developer here, a canvas for players to paint story moments is created. Players could sneak onto the ship the very last second, board the ship early and defend their lives inside the ship (which has circulating ramps within to allow for slide-jumps!), ambush at storm boarders for players running from the cold, hunt down other teams around the ship, pursue hiding teams by vehicle (you can honk the vehicle horn to intimidate other players!), and so much more. What’s more impressive for me is that, upon the arrival of the drop ship, the 5-minute countdown timer begins, and the countdown music analyzed earlier begins to play. The dramatic structure of the music intertwines with the drama of the endgame, making almost every game I have played thus far stressful from intense and fast-paced decision making and execution, but also highly rewarding.

In short, for me, the biggest inspiration from Scavengers is that, by creating a sandbox as a canvas + giving dynamic mobility to the players + pacing the game through macro events + awesome music, players get the sense that they are co-creating dramas to be remembered with other players as well as with the game developer. The players feel like they are movie stars creating stories impromptu with other players!