ELI5: A richer dimension of UGC is User Generated Behavior (UGB), or in other words user-generated AI. If blockchain were to revolution the game industry, builders on blockchain must tackle the holy grail of games - sophisticated game AI. Topology has conviction towards onchain AI interop and composability towards proliferation of UGB.

Chris Hecker asserted in his GDC lecture in 2008 that the key to solving any hard interactive problem is to find the right structure vs style decomposition (SSD), where “hard interactive problem” is defined as any problem that sits at the intersection of technology, aesthetics, and interactivity. To borrow the wisdom from category theory: human thinks in certain structure, which could be summarized by one concept: chop and conquer. For problems that are not practically choppable into smaller problems, human can not reason about them. For problems that lack effective frameworks of chopping and decomposition, human cannot begin to tackle them. Unchoppable problems are intimidating and uninvestible. Choppable problems can be tackled. How to chop a problem is the structure in SSD, whereas using that structure to solve the problem is the style in SSD.

Game AI as holy grail, and the lack of SSD for game AI

In the same GDC lecture, Chris Hecker asserted that AI should have had the most profound impact on games but had not - AI technology is the key to deep interactivity, consequence, and meaning. Chris further asserted that the reason for AI not having huge impacts on games was because we had not found the right SSD for game AI. Chris hypothesized the existence of Photoshop for AI, with which the process of creating AI does not involve coding. Fast forward to today, despite the proliferation of deep learning research, DRL agents playing complex RTS games competitively, and large language models run by hyperscalers triggering existential debates on AI consciouness, these research has ~0 bearing on the making of any game AI in state of the art AAA titles.

Note that “AI” here absolutely does not mean the popularized & superficial notion of machine learning! It means agents in game worlds that are able to sense, reason, decide, and act autonomously. Robotics is perhaps a fitter term, but I will stick to AI because robotics is a mouthful. Below is a classic characterization of AI from Russel & Norvig’s textbook. In essence, AI constitues sensing, intentionality, decision making, and acting within an environment that can be sensed, reasoned about, and acted upon. 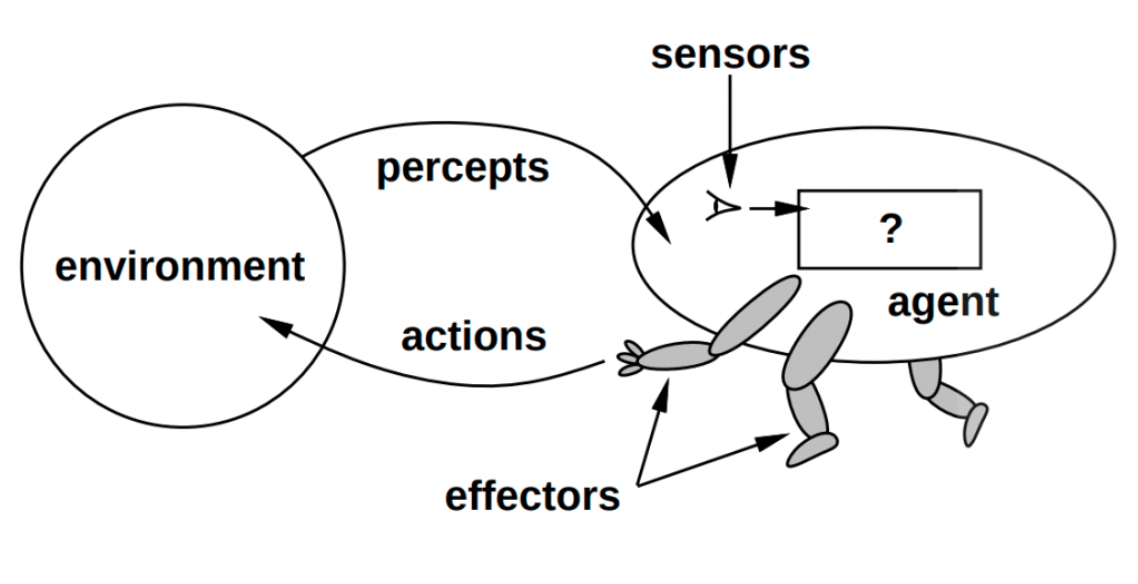 Our mentality at Topology is: if scalable blockchain were to transform the game industry, it must tackle the hardest challenge faced by the industry. We must think in leaps, not increments. Some thoughts here:

Our earliest attempt at game AI SSD, using a prototyped onchain 2D fighting game as the concrete targeted context, yielded the following structure for computing agent behavior in a loop:

In terms of agency modeling, our earliest prototype uses finite state machines to model the computation of intentionality and uses behavior trees to model the process of behavior selection, which is deeply inspired by the HFSMBTH model introduced by Bobby Anguelov in a GDC talk in 2017, banking on the promise of composability with these constructs. Furthermore, the prototype implements the popular input mechanics of “input buffer” in fighting games, which allows the player to queue up actions to be performed by the character at its next earliest availability. The use of input buffer is somewhat analogous to the “sequential” control node in game behavior trees; we believe the input buffer mechanic presents a more elegant solution for manipulating sequences of actions intended by the agent to be performed.

The publicized demo sequence was created with the following trivial agent model: